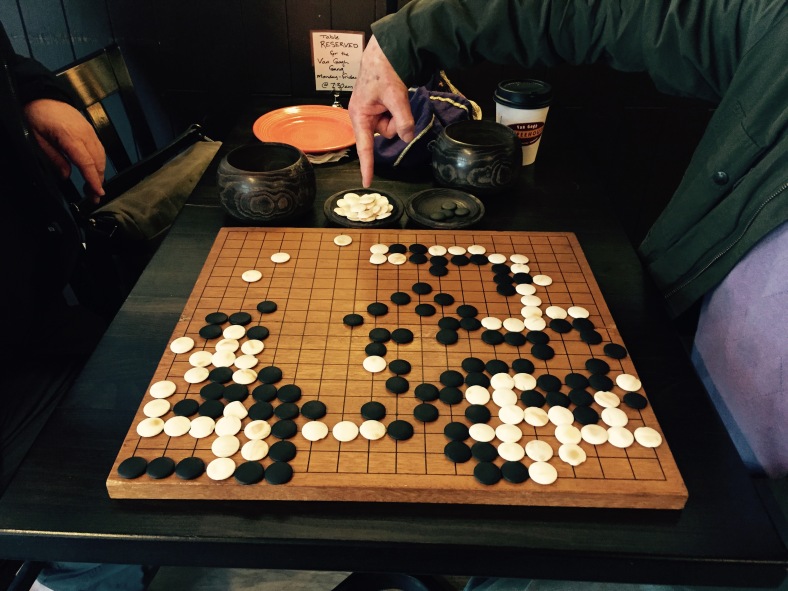 Isn’t there a saying that if we think about something enough we will attract it to ourselves?  Well, that’s what happened to me yesterday. I’ve been wanting to see and learn how this Asian board game is played. I walked in the coffee shop and there were two guys playing the game.  Wow – I was over there in a micro-second.

You see, I have watched some Asian historical dramas. In those movies the Emperor plays this board game with his Advisor. The Emperor always plays with intensity and strategic thinking. It’s clear that he uses this game as a way to help him think “real war strategy.” As I read the book, “The Art of War,” I wanted to learn about this game too.

These fellas were very welcoming. They told me the board game is called, “GO!”  The object of the game is to get as much territory as possible. As you surround your opponent’s stone(s) with your color of stone, you can take his stone(s) off the board. In the photo, you can see that the gentleman on the right is pointing to the white stones… he was showing me that he was “losing,” and needed to “focus” more.

If you’ve been wanting to learn about this game, I hope this post encourages you to give it a try. I know I’m going to try and play. Wikipedia’s article, “Go (game),” says this board game was created in ancient China 2,500 years ago and it is the oldest board game still played in its original form. The article also gives more information on the history of the game and how/why it tests your thinking and strategic skills.

If you are on the fence about playing, see American Go Association’s website where they list the “Top Ten Reasons to Play Go.”

If you like to think and to conquer, THIS GAME will challenge YOU!

One thought on “The power of learning strategy. Play the board game “GO!””

This site uses Akismet to reduce spam. Learn how your comment data is processed.